Today we met with #bestdocever and we talked about how I am doing health wise. The reality is this: I am dying. My brain has bled from the mets that are in my brain, and I’m still experiencing problems from those bleeds. We are having them treated with whole brain radiation, which is hopefully killing them, but will know when we are finished with radiation how that went. This course of radiation should be complete in the middle of October. In September I spent several days in the hospital with pneumonia and sepsis from the pneumonia. We had to leverage morphine to combat the cough so that I could get out of the hospital. The X-ray in the hospital showed that 1/3 of my right upper lung was white from pneumonia. I had to take time to recover to try to breath. 2 weeks later, I’ve had another lung x-ray that still didn’t look good. It got better, but now its back. It makes me tired a lot. It’s exhausting walking to the car, the bathroom and I ride around in a wheel chair. I find myself winded a lot. We don’t know if this will get better, but I’m able to get around without coughing too badly.

My platelets have remained extremely low, 150k-300k is the normal range. Mine have been as low as 8k and as high as 52k out of the ICU. When my platelets are below 20k, I’m not allowed to have whole brain radiation, so I’m having almost daily infusions of platelets to raise the level high enough to make that bar of 20. Starting this week, I’ll have HLA platelets twice a week that will hopefully do a better job of raising my platelet count and allow continued radiation. If they work, great, if not, I’ll go back to having daily infusions of platelets. My overall blood chemistry has been off for weeks, so I’m not able to have any chemo right now. Chemo goes after fast dividing cells, which hits cancer, but also my bone marrow. Until my bone marrow recovers, my overall blood counts will be off (white blood cells, red blood cells, platelets, etc.).

When I talk to #bestdocever today, we talked about the amount of time left. He told me that that he thinks I have about 2-4 months with brain radiation and no further treatment. We have discussed Death with Dignity which is an option in our state. I’m grateful to have a doctor who supports what ever I need, whither I choose that to be Death with Dignity or other options.

I don’t want to die. I don’t want have the conversation with the children about me dying. I don’t want to have to tell them that Mommy will die soon. I’m in denial. But someday, I’ll have a conversation with them and I have to decide how to make this work. In the mean time, there so much advocacy work I wish I could accomplish; there is so much work that our community needs. When I ask myself “what advocacy to do for our community?” I think about Jenny Grimes, who helped found MetUp with me, and I ask myself “Will this help save Jenny’s life?” If the advocacy will help keep people like Jenny alive, then the advocacy is worth doing. If it won’t help keep people alive, then it isn’t worth doing.

I can’t do the work anymore given how sick I am. I hope others in our community will remember that the only important thing they can do as advocates; the thing that is most important, is keeping people alive. I know its not easy, but it HAS TO BE DONE. It has to. I’ll do my best, as time goes on, to talk about the life I’m having to live. I can’t share my story all the time, every day, but I’ll keep doing what I can. I’ll hope that somehow I’ll get better. And if I can’t, I’ll live the life I have as best I can.

I’m grateful to all of you for supporting me, and I wish, oh how I wish, things could be different. I love all of you.

I’ve just experienced the most incredible weekend at the Living Beyond Breast Cancer Ninth Annual Conference for Women Living with Metastatic Breast Cancer. Incredible isn’t a strong enough word. I met the most amazing group of women–sisters living the same life as me, filled with treatments and fear and hope and loss. We laughed so hard, and bravely fought back tears, and hugged so much. So much. As we had to say goodbye at the close of the conference, I found myself hugging the same friends goodbye over and over again, not wanting to let go of them.

When it was over, and I got the airport, I checked in for my flight, and then went into a restroom, where I sat down in a stall and cried my eyes out. All the emotions of the weekend washed over me like a wave, but the biggest feeling came from knowing that I may never see these women again. I love them, and I don’t want them to die, but there is no cure for metastastic breast cancer. And so I know that next year, some of them won’t be back to the conference. And it won’t be because their lives are too full. It will be because their lives were too short.

On Saturday night, a group of us sat in a bar eating our dinner and drinking our whiskey, and we talked about how frustrated–no, how angry we are about what metastatic breast cancer is doing to us, to each other. And someone said “108 of us die every day in this country.” And as we talked, we realized that we felt compelled to express that anger and frustration in a visible and powerful way. We needed to take that energy and do something with it, not someday, but right now.

By the time we came up with this plan, it was pretty late at night. I stayed up even later drafting a eulogy for the 108 of us, as the the song La Vie Boheme from Rent ran through my head.  Meanwhile, the amazing Jennie Grimes spoke to the conference organizers, who said “Wow, great idea!” instead of “Uhhhh…you want to do WHAT?!?!” and helped us figure out the logistics to make it work. LBBC staff: you guys are INCREDIBLE. The support you showed us, and the way you partnered with us to allow us to express ourselves…it was so powerful. I hope you know just how special you are. (And I encourage anyone reading this to consider donating to LBBC, so they can keep supporting metsters like us.)

And so, at 10:45 yesterday morning, we lay on the floor of a hotel in Philadelphia, and held hands with each other, and I wept while my college BFF read the eulogy for us. She said, “Dearly beloved, we are gathered here to say our goodbyes to the 108 Americans who will die of metastatic breast cancer TODAY, and EVERY day, because there is no cure for our disease. They are our friends, our mothers, our daughters, our sisters, and they deserve better. They deserve a cure, and we honor their memory by DEMANDING IT, not someday, but NOW. And now, let’s have a moment of silence for those 108 women and men who are no longer with us.”

This is what we looked like. Sometimes there are just no words. 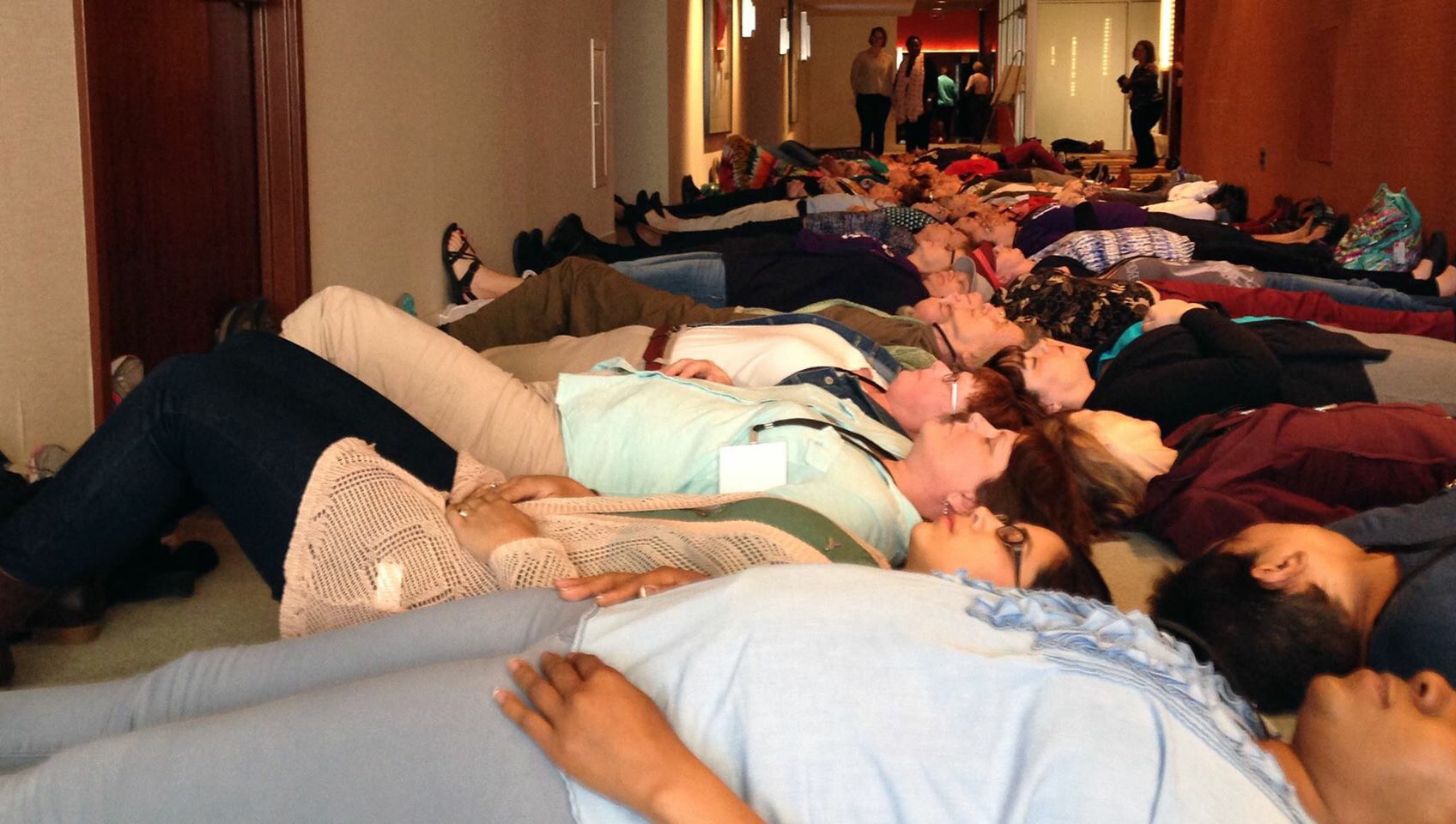 That afternoon, I went to the airport, where I read the news that one of those 108 was Seporah Raizer. Her final tweet was from Simon and Garfunkle’s The Boxer: “I am leaving I am leaving but the fighter still remains.” Her words were so beautiful and so powerful, and now there will be no more of them.

I don’t want to watch any more of us die. I don’t want people to be afraid to love my mets sisters deeply, because of the pain they will feel when we’re gone. I don’t want 108 women to die today, and tomorrow, and every single day, of metastastic breast cancer. I want a cure. I want all of us to live. I want our voices to be heard. I want our words to live on, not just in memory, but because we are still shouting them to the rooftops.

If you’re interested in organizing a die-in in your community, I’d be happy to speak with you about what we learned from this experience. Just drop me a line at cultofperfectmotherhood@gmail.com.

You guys! Today is #MetsMonday again, where those of us in the metster community go berserk with the social media and the hashtagging to try to convince the world to do something about our stupid disease. It’s the brainchild of the genius Beth Fairchild, a fellow metster and gifted tattoo artist. (Do you live in North Carolna and need a tattoo? Check out her shop!)

The theme for this MetsMonday is “If there is one thing you could tell people about metastatic breast cancer, what would it be?” For me, it’s this: there are too many awesome women living with, and dying of, this disease. Too many. So many, in fact, that I was going to put together a list of blogs by other metsters, so you can check out what they have to say, but Nancy, of Nancy’s Point, already has an awesome list.

So instead, I’m going to make a request: that you share this post on social media, with the hashtag #dontignorestageiv, and help us spread the word that there are too many of living with, and dying of, metastatic breast cancer. Because, maybe if people knew that a woman dies of metastatic breast cancer in America every 14 minutes, they’d do something to help us.