It’s weird not being able to breathe. I mean, I CAN breathe, but if I have to move around move at all, then I can’t breathe. Like, going to the bathroom to go pee, which is a few feet from my bed, leaves me completely out of breath. It basically sucks. We’re working on getting what appears to be a shitty company called Quest to get me some oxygen at home but because they’re taking for-fucking-ever to get around to it, I’m borrowing a tank from #bestdocever’s office. Having an oxygen tank helps a TON.

On Monday, I had my HLA platelets. Over the weekend, they’d dropped to 20K. After the infusion, they’d gone up to the 40s. Whopdiedoo. Oh, and it turned out that my hematocrit was 19, which is also fucking low. So, I had a transfusion, 2 bags of blood. I haven’t seen the results after the transfusion, so I’m not sure how much the transfusion helped. Last time, it raised my hematocrit from 20 into the 30’s, so let’s hope we see a similar result.

This whole thing sucks. It just does. It sucks that I can’t breathe. It sucks that not being able to breathe keeps me in bed, It sucks that the progress that I’d made cognitively is now sliding backwards because I’m so tired, my brain isn’t functioning right. It sucks that I slept all day at the hospital during my transfusion. It sucks seeing the terror in J’s eyes every time I gasp for air. It just fucking sucks.

Today we’re hoping to have an answer about what to do about my goddamn lung—maybe a stent in there to open up my lung a bit, so I can breathe more? Maybe something else?

UPDATE: As of 12:30PM today, I have an oxygen compressor, as well as some portable bottles to take to doctor appointments. Yay!!! Holy cow, does oxygen make me feel better. More human, my brain actually functioning, not coughing so much…it’s seriously the bomb. O2, I love you. 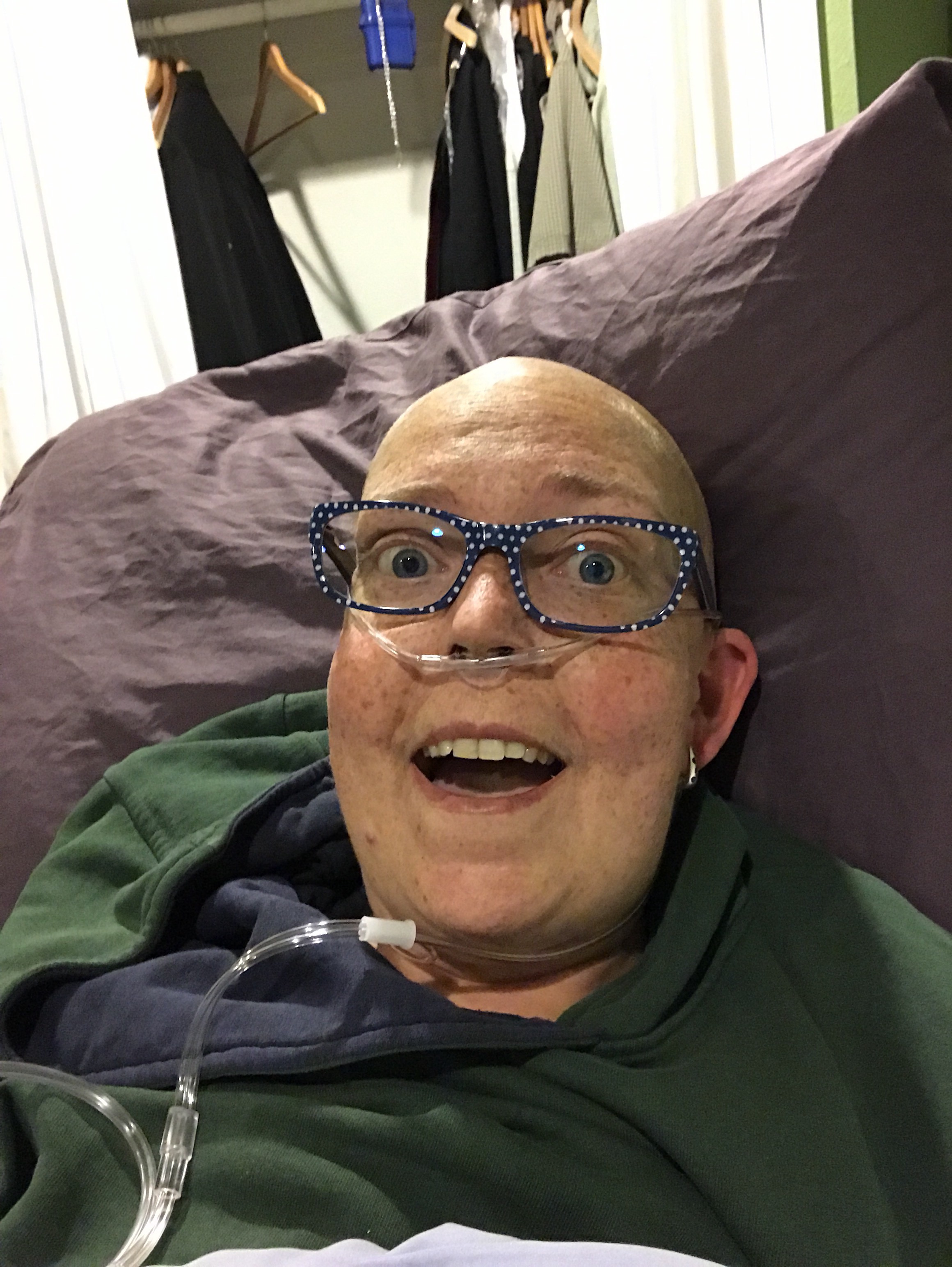 I’ve been struggling to put on my brave face lately. Partly it’s the fatigue, which has gotten worse with every chemo cycle. I’m now on my fifth round of carboplatin/taxol; neither of these are easy drugs to tolerate, and together, they’re a kick in the gut. When I’m tired, I’m more emotional. It’s just harder to plow through this shitty existence with a smile on my face when I don’t have any energy.

But it’s not just that. I had another brain MRI a few weeks back, and there were three more spots on it. Too tiny to say for sure that they’re more mets, but that’s what I’m expecting the follow-up MRI will show early next month. Which means more gamma knife surgery, more chemo, more treatment. When I got the news about the MRI, I got drunk, and I emailed my oncologist and said “It all just feels so fucking futile.”

I think there is still a part of me, buried deep down, that hopes that I’ll live long enough for a cure to be found, or at least, for some treatment to come along that will make metastatic breast cancer truly chronic. Because, if I could stay alive that long, then all this suffering I’m doing wouldn’t be futile. It’d be a means to an end: staying alive long enough for a better treatment to come along. One that adds more than few months to my lifespan, and one that doesn’t come with the cost of spending days on end lying in bed because I’m too tired to do anything.

But then I have yet another scan that shows yet more progression, and it’s like that tiny little bit of hope gets punched in the gut, and it hurts. It really fucking hurts. And I wish it wasn’t there anymore. I wish I could just accept that this is my fate: to keep being tortured for another year, maybe two, and then to die. Maybe if that little bit of hope wasn’t still in there, it wouldn’t hurt so much every time I see more dots growing on my brain.

But that is the reality of how I’m living with my disease: to live with that tiny bit of hope, to never fully accept that this is all there is for me, and to keep getting punched in the gut over and over again as death inches closer. It’s not just the treatments that are brutal and exhausting.

Luckily this is my last cycle of carbo/taxol for a while. After this, we’re switching to Xeloda, which is milder and hopefully won’t bottom me out so badly. I really hope so, because when I’m not so tired, hopefully I’ll be better able to pick up the pieces emotionally and keep pushing through this shitty thing I call a life. Because there’s another scan to face in a couple of weeks, and I need to brace myself for another punch in the gut.

When you are deciding to start a family, there is a lot of stuff you know, but you don’t KNOW it and you can’t KNOW it until you actually have that baby. One of those things is sleep deprivation. You know you’re going to be feeding the baby at 2AM, but you don’t KNOW what that is like until you’re living it. Like, people say “You’re going to be so exhausted” and you believe them, but you don’t UNDERSTAND what they’re saying until you’ve experienced extreme sleep deprivation. It is a hell of a thing that I can’t even put into words really, probably because when you’re that tired, that entire period of your life becomes a blur that you can’t really remember properly because you were too tired to know what the hell was happening around you. This would be the #1 reason why I think we need paid maternity leave in this country, because ain’t nobody doing their best work when they’re that tired. Seriously, when you’ve been running on 4 hours of sleep a night for 3 months, is it even safe for you to be behind the wheel of a car to drive yourself to work? Do you want to be on the road with that person? I didn’t think so.

When we had The Boy, he came home from the NICU on August 1, and on the night of my birthday in early October, he began sleeping through the night. And when I say sleeping through the night, I mean 12 hours straight, every night. People used to congratulate me on it, and ask me what I’d done to get him sleeping through the night so quickly. I was like, “Damned if I know.” Really, I had no idea why he was such a good sleeper. But people would press me for my secret, as if I had learned some special wisdom somehow, like I was the Baby Whisperer or whatever. I actually had people say to me, “It’s because you’re such a good mom and you’re so laid back, that’s why he is able to sleep so well.”

Then I had The Girl. She’s now almost 2 and there are still nights she’s up at 2AM, just AWAKE and wanting to play or talk or whatever. She also screams in her sleep a lot, for no apparent reason. I’m guessing nightmares maybe? Perhaps she farted and it scared her? She is just a really really bad sleeper, always has been, maybe always will be. At first I sought out advice about how to get her sleeping better, thinking maybe there WAS some trick I could learn that would help her sleep through the night and if I just learned the right trick, I’d finally be able to get a good night’s sleep. But you know what? People have all kinds of ideas about what they think worked with their kids, but none of it may work for your kid. None of it worked for my kid.

One of the tenets of the Cult of Perfect Motherhood is that there is some body of knowledge out there that you need to acquire in order to raise your kids the right way, and in fact, that there IS a right way to raise your kids. And if you just find the RIGHT book, it’s going to teach you how to get your kid to sleep through the night, because there is a perfect motherhood out there, and you must try to live it. But, kids are all different. Some of them sleep through the night for no reason, and some of them don’t sleep through the night for no reason. Some of them walk early and some of them walk late, some of them have disabilities and some of them don’t. Some are great eaters and some are not. There is no one right way to parent your kid. Every kid is different and every parent is different. People can share ideas and advice, and it may be completely useless to you, or even destructive. And it doesn’t mean they’re bad parents, and it doesn’t mean you’re a bad parent. It just means, every kid is different and there is no such thing as the one right version of motherhood.